SYROS: the noble lady of the Aegean

Syros lies at the heart of Cyclades, the most popular island complex of Greece, the center of the Cycladic Civilization, known as “Syros-Keros civilization”, of 3d millennium B.C. Remnants of this advanced civilization are scattered all over the island, mainly on Halandriani and Kastri. Homer, in his Odyssey, referred to the island as “Syrii”, while in another interpretation the name of the island comes from the word ousyra, meaning happy or from the Phoenician word syr meaning rocky. It was the birthplace of philosopher Pherecydes, teacher of Pythagoras and inventor of the first sundial.

During the Ottoman occupation, thanks to the big number of Catholic polulation and the agreement with Pope, Syros enjoyed special privileges (low taxation), which contributed to the island’s future economic and social development. During the 1821 Greek war of independence the Syrians kept neutrality. However, the devastation of Chios in 1822 and the persecution of the Greeks in Asia Minor, Samos, Rhodos, Psara, Kassos and Crete caused a great flow of immigration, a part of which moved to privileged Syros, where refugees found shelter and security.

Syros is making bid for European Cultural Capital of 2021. Syros is host to a classical music festival, a guitar festival, an accordion festival and an International Anima Forum. This year Syros hosts the 7th International Festival of Animation.

Hermoupolis is the capital and the administrative center of Syros, as well as of the Cyclades island complex and the Region of Southern Aegean. It had been the marine, the industrial and the cultural center of the new Greek nation-state in 19th century. The Syrian shipyards played the main role in reconstructing the Greek navy which was destroyed during the revolution of 1821. During the second half of the 19th century Hermoupolis became the first port of Greece and the most important commercial and shipping center, a bridge of exchange for goods and ideas between the West and the East.

The island’s capital was constructed in 1838 according to the plans of Wilhelm von Weiler, with magnificent public buildings, a cultural center, beautiful mansions, a big square and charming marble and cobbled streets, marbled staircases, ceiling frescoes and wall paintings. The architectural style of Hermoupolis, in accordance with the principles of romantic classicism, is unique in the Aegean, privileged with the theater Apollon, constructed 150 years ago, the impressive Town Hall designed by Ernst Ziller, the Cultural Center, the fabulous churches and the Art Gallery. The town also has a big modern hospital and an open-air cinema.

The numerous cultural events organized throughout the year reflect the past glamour and the future’s perspective. Syros hopes to be the Cultural Capital of Europe in 2021.

It is all about the beautiful, small, picturesque, second town of the island, one of the oldest municipalities in Greece, up on the hill of Saint George, northwest of Hermoupolis. It was constructed by Venetians at the beginning of the 13th century and keeps its medieval characteristics up to date. Sitting on the hill of St. George, with the narrow alleys and outdoor steps, you’ll feel as if in a different era!

The founding and lifestyle of the town are closely connected with the period of Frankish occupation of the island. The settlement is spread on the central hill of Syros island, the top of which is dominated by the catholic church of Saint George, built on the 13th century. Innumerous stairs and narrow alleys with fragrant flowerpots, charming houses and little shops, café and traditional taverns with spectacular sea view, give an exceptionally attractive character to Ano Syros. It is the birthplace of the great musician and teacher of rebetica songs Markos Vamvakaris.

This is the north mountainous side of Syros, with the astonishing scenery of wild beauty and the prehistoric settlements of Kastri and Chalandriani. Here, some of the best samples of the Cycladic Civilization (3d millenium B.C.) have been brought to day light. At the eastern part of Apano Meria, lies the Ferekidis Cave, where the philosopher Ferekidis, the teacher of Pythagoras, lived. Exploring the wild and fascinating Apano Meria, you will meet the settlements of Mytakas, San Michalis, Finikia, Kyperoussa, Hartiana, Richopo, Platy Vouno etc. In this part of the island you can visit remote, little paradise beachs: Grammata, Lia, Aetos, Varvaroussa. You can more easily reach them by sailing from Kini on local boats.

A multiple road network connects the coastal villages with those of mainland and all of them with Hermoupolis: Chroussa, Mana, Parakopi, Vyssa, Pagos, Danakos, Piskopio, Talanda, Alithini. Those villages were the most popular summer resorts in older times. 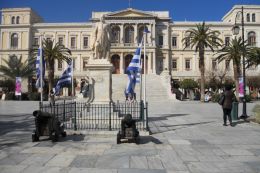 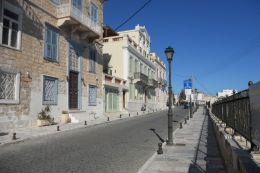 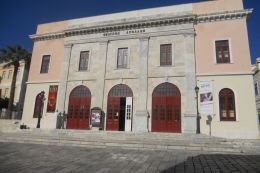 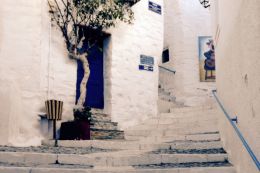